The Story – The History 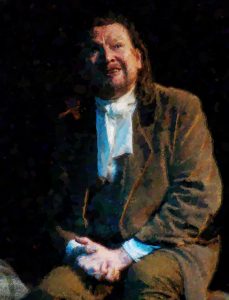 Silas Marner is a young weaver, part of a devout Christian community called the Lantern Yard Fellowship in an unnamed Northern town. Silas suffers from epilepsy and carries himself with grace and dignity. However the devout Silas finds himself framed for theft and a murder he did not commit by his best friend who also steals his fiancée. Silas is now banished from his Lantern Yard Christian community. He could be hanged or imprisoned or transported for the crimes he is accused of.

Betrayed, broken and abandoned by everyone, he renounces his faith and fleeing for his life he finds refuge in a faraway country village called Raveloe. Lost and lonely he turns to work for comfort and over the next many passing years amasses a fortune in gold. He becomes a miser. He lives alone but for the company of a kindly housekeeper Dolly Winthrop. He is shunned by the villagers. He often falls into epileptic fits which frightens them. His faith now lost, he refuses to attend the local church. 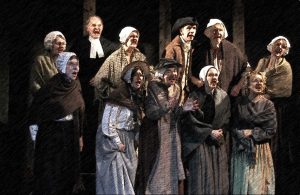 The local Squire of Raveloe has two sons Godfrey and Dunsey who now enter Silas’s life in a most unexpected way. The oldest son Godfrey has a secret wife and child hidden in a nearby town. His younger brother Dunsey blackmails him threatening to reveal his secret to their father the Squire. This will result in Godfrey being disinherited. He will be ruined. Having no real money of his own Godfrey allows his evil younger brother to take his fine stallion Wildfire and sell it to pay off Dunsey’s large gambling debts.

Dunsey takes the horse to market but on the way joins a local hunt and kills the horse in a jumping accident. With a heavy snow storm falling, Dunsey comes across Silas’s cottage. Silas is away delivering cloth to his clients. Seeking temporary shelter Dunsey finds and steals Silas gold and disappears into the night. 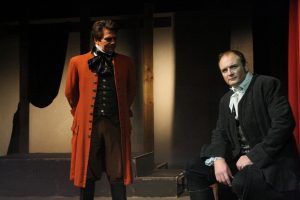 Silas returns to find his gold has been stolen. He falls into an epileptic fit and lies unconscious on the floor. Down the lane from Silas’s cottage wanders Godfreys secret wife and child Molly Farren and her baby. They have come from the faraway city walking for days and days. Molly is determined to see Godfrey at the Manor House. She is overcome by exhaustion and cold and dies in the snow.

Freezing in the snow storm Molly’s toddler crawls towards Silas’s cottage seeing the flickering candlelight in the distance. She goes through the open door and falls asleep in front of the small fire. Silas comes out of his fit to find the abandoned sleeping baby. He thinks her golden curls are his stolen gold.

A search party come from the village led by Godfrey looking for Dunsey after they are told of his riding accident. They find Molly’s dead body in the snow. Godfrey pretends not to know who she is. They go to shelter at Silas’s nearby cottage. They find that Silas has had his gold stolen and has found a baby in front of his fire. Godfrey knows the baby is his daughter but again remains silent to protect his reputation and inheritance. He offers to take the child to the Manor House.

To everyone’s surprise Silas vows to raise her as his own. He says she is a sign from God. God has punished him for renouncing his faith by taking his gold but has forgiven him by sending him the baby. He has re-found his lost faith. He says he will love and protect her while there is breath in his body. He sends Godfrey and the men away and promises he will stand by the child.

Fifteen years have now passed years pass and Silas has raised the abandoned baby as his own daughter. He is now an adoring Father. He names the child Eppie after his long dead sister. Eppie has now grown up and has become a beautiful young woman. 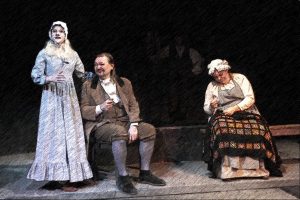 Silas’s life is now that of a changed man and he and Eppie have become favourites in the village. They both attend church together. Silas and Eppie revisit the old city he once had to flee from (now in the grip of The Industrial Revolution) and realises that those who ruined his early life are now long gone and vanished in the smoke and grey of the factories. He happily returns back home with Eppie to see her fiancée Aaron Winthrop (son of Dolly the housekeeper)

Godfrey is now The Squire after the death of his father.  He has married a wealthy local Lady Nancy Lammeter. His brother Dunsey vanished on the night of the finding of the dead woman and the baby (Godfreys secret wife and daughter) As Squire, Godfrey holds a Grand Christmas Ball for all the village. He has been tortured by the sight of his daughter all the last fifteen years. He can say nothing for fear of his reputation being destroyed. He is a troubled soul.

Just as the ball begins the village constable sends for Godfrey urgently. A body has been discovered by local workmen in the bottom of a nearby gravel pit. It is identified as Squire Godfreys younger brother Dunsey who they find is still clutching Silas’s bag of gold in his dead skeletal hand. 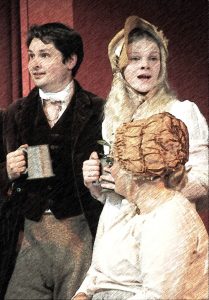 The local magistrate is summoned. Silas is called and his gold is returned. Godfrey apologises to Silas. He and Eppie offer Squire Godfrey their condolences. The news forces Godfrey to finally break down and confess that Eppie is his daughter and that Molly was his wife. Everyone including Lady Nancy his wife is stunned. Godfrey produces some documents and the local magistrate declares that Eppie belongs to Godfrey. Silas is heartbroken and shattered. Godfrey and Nancy say that Eppie should come and live with them at The Manor House and be raised as a Lady.

Eppie declares that she will never leave Silas as she sees him as her true father. Godfrey and Lady Nancy give up their claim. They all agree to honour Eppie’s wishes. Silas is overjoyed.

Eppie marries Aaron and everyone attends the wedding. All the families are united in love.